Today was the first day of bow season. I was able to get into the woods 30 minutes before sunrise. I was a bit surprised I was anticipating a SW wind and turned out to be a swirling wind which made it difficult to find a good spot. The morning was rough, my action cameras batteries were dead, however everything else went as planned. (minus the deer). I went from a spot on the Holland/Stafford line to an old spot in Sturbridge, MA near an apple orchard. No luck at either spot. 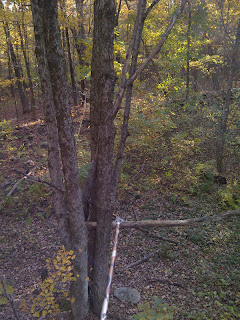 In Sturbridge I was able to see some new deer sign which was encouraging. A few rubs and a few new tracks, activity was good but I went back to Holland for the afternoon. I had a hunch to try a new spot on Blodgett Road in Holland. I went to the left side of the road since the right side is private property. The action was non stop. I used my Classic Summit Viper climbing tree stand along the edge of an old abandoned road. Turned out to be a really good spot. About 10 minutes past 2, I heard a few turkeys in the distance so I began trying to call 'em in to see if there was anything good. Meanwhile, I got a text message from my grandfather saying there was a pig near his stand that was nearly 400lbs. Apparently a farmer had lost his pig a few weeks back and this was him. (Bacon and Ham ... almost as good as Venison)

While calling in the turkeys I turned to my left to see a smaller 6 or 7 pointer with his nose in the air smelling. He waited about 5-8 minutes before coming out behind a bush. Before I was able to get off a clear shot he was running along a stone wall as if he was being chased.

I learned later that he had been spooked by a fellow hunter in the area who had just returned from some hunting in Alaska. He said he had been chasing a doe through the woods all afternoon. In my opinion if you're going to bow hunt ... do it from a stand. I rarely see hunters in Massachusetts who can stalk with enough talent to kill on the run.

All in all it was a great day for hunting and I'm hoping to return to this spot in a few days. I will be trying a new spot in Sturbridge this year, a fairly well traveled spot where I have seen a number of large bucks. For those of you able to hunt all week, best of luck! 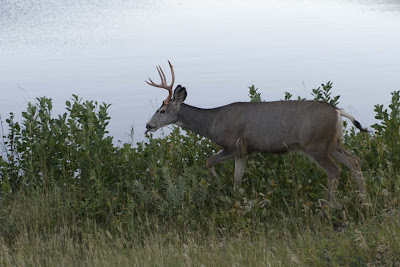