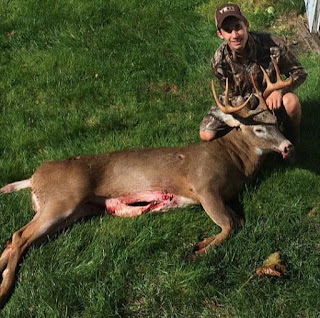 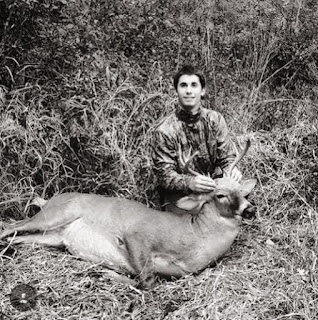 October is typically a slow month in Massachusetts. Only a select few bury their dream buck early season. Some even nail two like Dominic out of Dartmouth, MA who ran into two monster bucks in Southeast Massachusetts during opening week (above).

This is the first year that Bow Hunting Massachusetts has pulled together a chart of key dates. For those wondering when to take some time off from work the answers are below!

October 27th-- The full moon in October. Typically there's a lot of action around the last full moon of October. This is the first of the must hunt days in Massachusetts. If you can get in the woods for sunrise do it but if not don't be afraid to sneak out for an early afternoon hunt and see what comes out. Bucks will be just starting to look for the "early does" and starting to drop their guard. I would suggest getting some Tinks 69 putting some on the bottom of your boots and a little in a mock scrape. We have had good luck doing this in the past.

November 5th/6th-- Historically in MA these are two great days to be on the stand for morning hunts. There will be a few does in estrus at this point and the bucks will be preparing for war. Try to get out there extra early since the activity will be pretty high. Let's hope for some cold weather to go along with it.

Veterans Day November 11th -- Our favorite day of the year. This is hands down going to be one of the hottest days on the stand. Get in early and try to stay on the stand all day. The breeding wont be at it's hottest until a few days later but this is our first shot at that elusive monster!

November 13/14th-- If you're a Saturday only hunter this is your day. Get on the stand early and be prepared for some extra action. At this point the bucks should be breeding does and browsing hard.

November 21st-- As the weather patterns shift this is another Saturday worth waking up at 4:30AM. Get to your stand early and dress warm. The bucks should be moving and their guard will be down.

November 26th-- Happy Thanksgiving. If you haven't nailed one yet, don't fret.... Thanksgiving might be your day. The 26th is the day after the November full moon and might be your last shot of getting that big buck before the gun season starts.