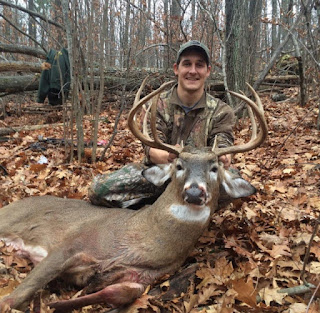 The back story:Nick Julius was hunting a spot in Zone 9 known for it's share of big bucks. For the last four years he's caught a couple monsters on his trail cam and done his fair share of scouting. After using scent drags for a few sits Nick decided to change it up a little and try going in "stealth mode", no scent drags no estrous doe scents nothing except BowhuntMass.com's personal favorite cover scent Scent Away spray.

Soon after Nick texted his father that he was in his stand safely this bruiser rolled over some branches nose to the ground, rolling through at ten yards. Nick hit his grunt call but the buck had something else on his mind and didn't flinch. Nick desperate to get this trophy to stop he called "HEY!", the buck stopped for just long enough for Nick to put his Schwacker broadhead into his vitals. Nick's Mathews z7 Magnum and gold tip kinetic arrow did the trick.

The Recovery:
Nick knew he hit the buck hard but didn't know exactly how much penetration he had on him. Nick did the right thing and waited the buck out about six hours until he knew it was safe to go recover the buck. He tracked the blood trail for just about 200 yards where he found this beauty next to a blowdown. A great deer on a great morning.